Create a rainbow relying on the properties of cohesion and adhesion 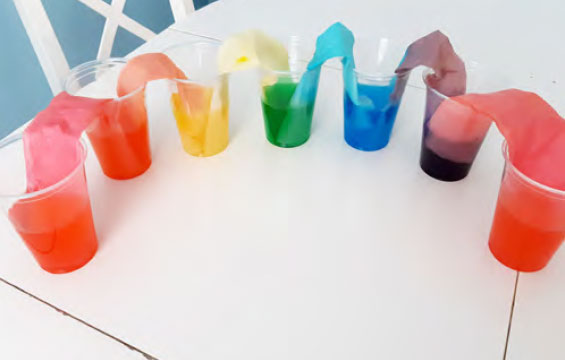 Water travels from one end of the paper towel to the other thanks to a process called capillary action. When
water molecules stick to each other, it’s called cohesion. When they stick to other substances, it’s called adhesion. Capillary action occurs when adhesion is stronger than cohesion.

Paper towel is made from cellulose fibres, which has tiny gaps. The gaps act like capillary tubes, pulling the water upwards. Water flows upward because it adheres strongly to the walls around these gaps. This same process explains how water climbs up from a plant’s roots to its leaves.

During this experiment, you see the water and the food colouring travel up the paper towel. Adhesion is overpowering cohesion. When the paper towel can’t hold any more water, the power balance shifts: adhesion is no longer more powerful than cohesion. Gravity takes over, and the water is released back into the empty cups. The colours mix in the empty cups, creating a rainbow.